Smoking rates are much higher in deprived areas (24%) than in more affluent areas (14%).

38% of those who made an attempt to quit smoking over the last year used an e-cigarette during this attempt (It is important to note that this statistic cannot be directly compared to the 41% statistic last year, which referred to successful quit attempts).

Use of e-cigarettes among ex-smokers rose by 30% over the last year.

Use of e-cigarettes among non-smokers remains extremely low, at just 1%. 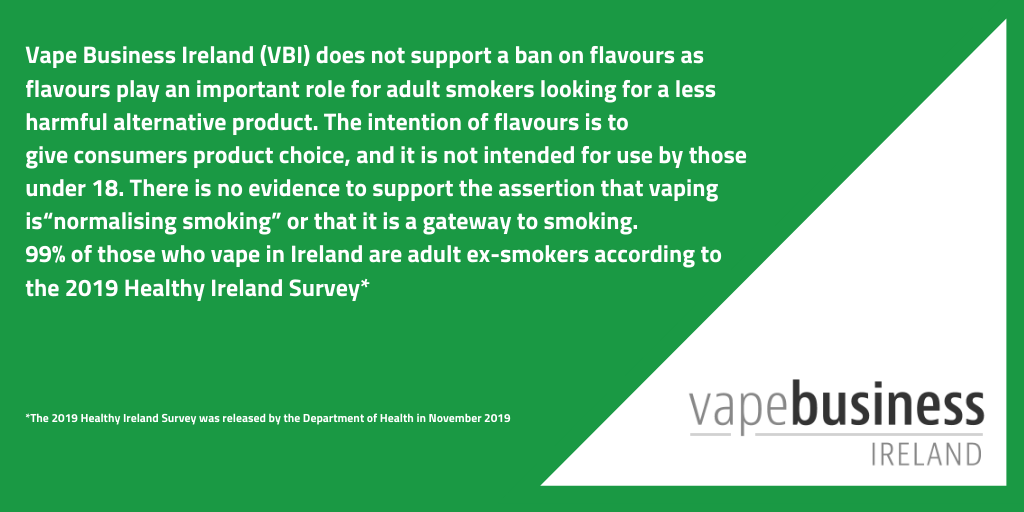 Vaping products are a stand-alone category comprising different types of devices; from battery operated devices with either built in (single use) or replaceable cartridges to hold the liquid to be vapourized and inhaled, to pen style devices with refillable tanks that are refilled with separate bottles of the liquid. Vaping products have a heating element that atomizes the liquid solution also known as e-liquid. These products may or may not contain nicotine.

Vaping is a viable alternative to cigarettes

There is extensive research into the role vaping can play as an alternative to smoking.

Public Health England has found that “e-cigarettes are 95% less harmful to your health than normal cigarettes”. Vaping poses only a small fraction of the risks of smoking and switching completely from smoking to vaping conveys substantial health benefits.

Vaping has been found to be the second most important tool for those looking to quit smoking (second only after willpower alone) and a study by Queen Mary University London found vaping products to be “more effective for smoking cessation than nicotine replacement therapy”.

Less than 1% of vapers are never smokers, this is a product only for smokers who are struggling to quit.

A UK cross sectional population study reported that smokers trying to quit switch without professional support are around 60% more likely to succeed using e-cigarettes than if they use products such as patches or gum or just willpower.

Vaping could be contributing to at least 20,000 successful new quits per year in the UK and possibly many more. Smokefree New Zealand, The American Cancer Society, Public Health England, Cancer Research UK, ASH UK and many others have endorsed vaping as a viable alternative to smoking.

There are many reasons why vaping is a popular alternative to smoking.

Unlike other nicotine-delivery systems, vaping mimics the hand-to-mouth motion of smoking. This behavioural characteristic of vaping often helps smokers in their journey to quit cigarettes.

Likewise, the range of nicotine strengths and e-liquid flavours available with vaping products means that users can customise the product so it best suits their needs during their quitting journey.

Choosing the right type of vaping product for you

Where to purchase vaping products

Vaping products are available to purchase in retail shops, specialised vaping shops, stalls in shopping centres and online. Vape Business Ireland members are committed to ensuring they uphold the highest quality standards for their customers. As such, all members of Vape Business Ireland are  compliant with EU legislation.

Should you be interested in purchasing vaping products from one of our members, our store locator highlights the VBI vendors closest to you.